Testimonial by Staffan Eriksson of the February 2017 PADI IDC on Phuket, Thailand

Testimonial by Staffan Eriksson of the February 2017 PADI IDC on Phuket, Thailand

Here we go, another one; Testimonial by Staffan Eriksson of the February 2017 PADI IDC on Phuket, Thailand in conjunction with PADI CDC Center ‘Dive Asia’ on Phuket.
Staffan is now the fourth out of four participants of the February PADI IDC on Phuket to write and submit a testimonial, making it four out of four. Thanks to all four of you, Iris, Christophe, Staffan and Robin.
Staffan is on a years break (at least that is what he thinks) from his regular job and wants to travel and work as a dive instructor during this year, currently he is in Indonesia, last thing I heard on Gili Air. Hope you enjoy your time travelling around the Asia Pacific region and find what you’re looking for.
Despite being out of practice and dive experience at the start of the February 2017 PADI IDC on Phuket, Staffan picked up the pace really fast and it seemed that he didn’t had a dive break at all.
Hope to meet soon again Staffan and catch up on the good times we had during the IDC. 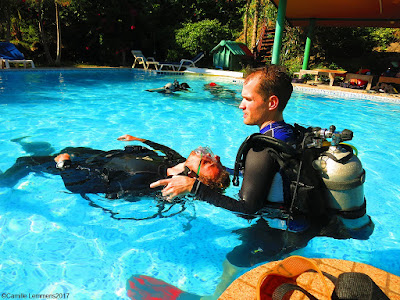 Testimonial by Staffan Eriksson of the February 2017 PADI IDC on Phuket, Thailand; Staffan practicing Rescue exercise # 7 in the pool, during the recent February 2017 PADI IDC on Phuket at Dive Asia’s scuba diving training and IDC facilities
Here we go, the Testimonial by Staffan Eriksson of the February 2017 PADI IDC on Phuket, Thailand for you;
I decided to come to Thailand solely because of Camille and his good reputation as a Course Director. In short, he lived up to both his reputation and my expectations. This is my view of Camille and his teaching style which hopefully will help you getting an idea of what it could be to do your IDC with him:
Camille undoubtedly has the knowledge and experience to be a great Course Director. His sense of humor rubbed off in our group to the extent that I think even he thought it was a bit too much at times. His teaching style is can be described as “play hard, work hard” and his focus is always on what he thinks makes a skilled and safety conscious instructor and what he knows is needed to pass the IE. Sometimes he might come off as being strict or picky in the skills, while other times he quickly browse though the slide shows. The only “negative” in Camilles skill set would be his upselling and other ways to make a few more bucks. Something which sadly is almost required when making a living in the diving industry.
Personally, I was forced to reschedule my IDC which meant I had only one logged dive during the four years leading up to the IDC (!) and I arrived the day before the course started. Despite being rusty, jet lagged and needing time to get used to my new gear, I ended up getting straight fives in the IE and roughly 90% on the theory, all thanks to Camille! The rest of the group did just as well despite illnesses, lost gear and other mishaps. We were all very happy with the course and can strongly recommend others to do their IDC with Camille!
Thanks Staffan, always appreciated when people take out the time to sit down and write a testimonial!
Contact me for more detailed information on your next opportunities to participate in a PADI IDC program, complete your PADI IDC Staff Instructor course or in case you’re looking to staff PADI IDC programs on your way to become a PADI Course Director.
The next PADI IDC programs will start 27th March on Koh Lanta, Thailand in conjunction with PADI 5* IDC Center ‘Blue Planet Divers’, followed by our monthly programs on Phuket, Thailand in conjunction with PADI CDC Center ‘Dive Asia’ starting with 11th April and 9th May and this is followed by a program scheduled to start 26th April on Koh Phangan, Thailand in conjunction with PADI 5* IDC Center ‘Haad Yao Divers’.
See you there,
Camille