At last I can say that the PADI IDC for November-December 2016 on Phuket is under way in conjunction with PADI CDC Center ‘Dive Asia’ on Phuket and it’s also out last PADI IDC program of the year 2016 here on phuket with just one more PADI IDC to go for me this year.
The reason I say at last is because yesterday the last person for this PADI IDC program joined us, Patrick from Switzerland couldn’t make it any earlier to Phuket which forced me to re-arrange the schedule a bit from the normal routine to accommodate him, However, since he’s already a PADI Assistant Instructor, it was all possible and the previous two days I presented the so called online presentations, eight of them over two days and it went down a lot better than expected. Now let’s hope that the remainder of this new PADI IDC schedule can hold it’s ground as well. 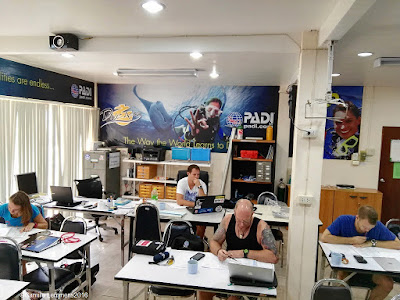 The PADI IDC for November-December 2016 on Phuket is under way; From left to right; Ilse, Sam who’s doing his PADI IDC Staff Instructor course, Steven and Patrick during diving theory exam practice yesterday morning.
We have a small but nice group it seems and as always, very international, this time around with candidates from the Netherlands, Australia and Switzerland and staff from the UK and the Netherlands.
Yesterday we also went to the pool or confined water for the first time and completed a PADI skill circuit and practiced some rescue exercise # 7 scenarios.
Today we will continue with practicing theory exams and some more presentations by me followed by an afternoon in the pool again, repeating some of the skills again and starting to introduce some workshops.
Plenty of work still ahead of us and hopefully some fun as well, but it looks like that should be just fine! Stay tuned for more updates to follow next week.
If you’re interested in participating in one of my PADI IDC programs, your next opportunity and the last one for 2016 is scheduled to start 9th December on Koh Phangan in Thailand in conjunction with PADI 5* IDC Center ‘Haad Yao Divers’, followed by the first PADI IDC for 2017, back on Phuket, Thailand in conjunction with PADI CDC Center ‘ Dive Asia’ and this all starts 10th January and this is followed by a PADI IDC programs that is scheduled smack into the middle of the Chinese New Year holiday and will take place on Koh Lanta, Thailand in conjunction with PADI 5* IDC Center ‘Blue Planet Divers’ and is scheduled to start 26th January.
See you there,
Camille