The testimonials were coming in thick and fast yesterday and in quick succession I received this great Testimonial by Sophia of the April IDC on Koh Lanta in April 2016 in conjunction with PADI 5* IDC Center ‘Blue Planet Divers’ on Koh Lanta.
Thanks Sophia, for writing this testimonial and taking the time out to do so, it’s much appreciated and it’s a nice testimonial to boost! It was a pleasure having you around and I’m glad you enjoyed the IDC and got out of it what you wanted. You will make a great instructor once you hit the road again and start teaching and I’m looking forward to see where your first stop will be in the near future. 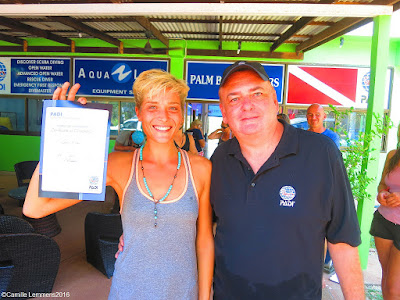 Testimonial by Sophia of the April IDC on Koh Lanta in April 2016; Sophia with Rob, the PADI Examiner, after successfully having passed the PADI IE on Koh Lanta in April 2016
Here’s Sophia’s testimonial;
I chose to make me IDC with Camille Lemmens in light of his successive award as a Platinum Course Director. I was not sure about what it might represent, although I suspected that he had not stolen this prices…
Rapidly during the course I understood.
When you wish to become instructor, you invest time and especially money. Training is short and intense. It is natural to have doubts and apprehension at different levels.
But I have been very quickly reassured to have in front of me someone who knows his subject on fingertips, able to adapt to each individual and remaining just with all of us.
Lastly beyond his professional skills Camille is a person who has great human values and qualities. You’d probably be delighted to meet him.
My advices, review your theory correctly before the IDC, rest well, and let yourselves be guided, everything can only go well with Mr. Lemmens !
Thanks again for taking the time out to write this great testimonial.
You can join me for one of my up and coming PADI IDC programs, with a monthly scheduled PADI IDC on Phuket, Thailand, starting 3rd May and followed by 7th and 29th June. Check my full PADI IDC schedule here.
See you there,
Camille