Diving at the 38th Parallel in South Korea

Yesterday I did a fairly unique dive, not a dive that many people have logged. I dived at the 38th Parallel in South Korea, the pre-war border of South and North Korea, before the war.

Group picture, from left to right; Michael, Larry, myself and George
The actual location according to a Google map is at Gisamun-ri, Hyeonbuk-myeon, Yangyang-gun, Gangwon-do. So, there you are! After our PADI IDC Open Water dive yesterday at Namae 2 beach, Larry, one of the IDC candidates asked me if I wanted to do a dive at the 38th Parallel.

George pointing out on a map where we are
That was completely down my line of interest, so it took no convincing at all, especially considering that we were only a 5 minute car drive away. Larry also runs a dive club called ’38th Parallel divers’. If somebody knows about diving here, it’s Larry!

Exhibition center
After a short card rive, sure enough, we arrived at the 38th Parallel marker on the East coast. There’s a big stone marker, as can be seen on the first picture, an exhibition center, which we didn’t enter, since we were in wet wetsuits (we just hopped in the car after the dive and it was raining) and a few other touristy bits and pieces. There’s also a beach just around the corner, which we headed off to. 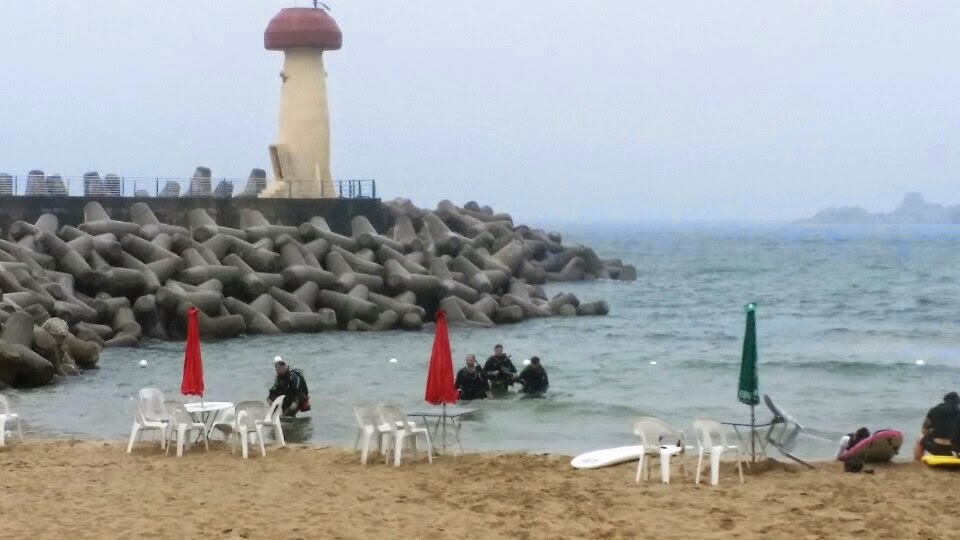 Exiting the water after the dive
Once on the beach, where there were a couple of dozen surfers having fun in the waves,just when we were about to enter the water, a young police officer told us that we can’t enter, due to safety regulations because of bad weather conditions, since a typhoon was about to pass over the peninsula.

Did anyone say tourist attraction?
Just when we were about to call it a day, a more senior police officer came along and after a bit of talking, allowed us to go in for 5 minutes and not past the concrete wall that protects the harbor. Happy as Larry we went off and into the water and did our 6 minutes dive. Upon surfacing, the older police officer was talking on a bull horn and I heard sirens going off and all the surfers were back on the beach. Which slightly agitated movements, he ordered us out of the water. All along Korean’s coast, it seemed that everybody was not allowed to enter the water anymore.
I was a very happy camper though, we managed to complete the dive and now I’m an official 38th Parallel diver and I will receive a certificate from Larry and later the same day, I also received two t-shirts from him, of his dive club! Awesome!
Thanks a lot to Larry for taking me out here, for George for being a buddy and coming along, just fore the trip and for Michael, since we shared the same experience, both being the new 38th Parallel divers on the block!
Camille